India got the better of Ireland by seven wickets in the first T20I of the two-match series at The Village in Dublin on Sunday. In a game that was reduced to 12 overs per team, India sent Ireland into bat after winning the toss. Ireland did well to post 108 for 4 after losing three wickets for 22. Harry Tector stood out for the hosts with an unbeaten 64 off 33 balls. He hit six fours and three sixes in his excellent innings.

For India, leg-spinner Yuzvendra Chahal stood out with the ball, claiming figures of 1 for 11 from three overs. He got the wicket of Lorcan Tucker just when he was beginning to look dangerous. Bhuvneshwar Kumar, skipper Hardik Pandya and Avesh Khan all chipped in with one wicket each. Bhuvneshwar cleaned up opposition skipper Andrew Balbirnie for a duck in the first over while Hardik sent back Paul Stirling.

In the chase, Deepak Hooda opened the innings and smacked an unbeaten 47 off 29 balls, hitting six fours and two sixes. Ishan Kishan contributed a quickfire 26 off 11 while captain Pandya chipped in with 24 off 12, which included three sixes. India raced to victory in 9.2 overs. 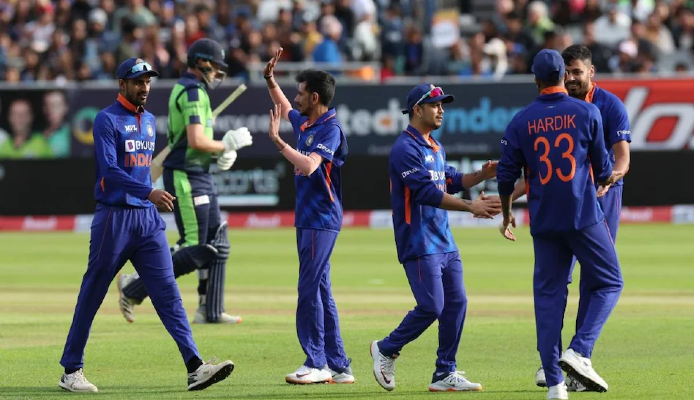 Speaking after the win, India captain Pandya said, “Great to start a series with a win. For us as a team it's very important to start with a win. Quite happy with it.”

On debutant pacer Umran Malik, he added, “He's been fantastic for his franchise. But I felt, also had a chat with him, he'll be more comfortable with the older ball.”

The 28-year-old also praised Ireland, which reserving special accolades for Tector. He said, “Ireland batted fantastically, had to go back to our main bowlers. Maybe next game he'll have a full chance. Some of the shots he (Tector) played were mindblowing .”

Ireland captain Balbirnie added about the loss, “Tector batted outstandingly well to get up to the total. We were good and we were bad. Against a team like India you have to be good. Harry's been in great form in ODI cricket and he carried that today.”

The second T20I of the series will also be played at The Village in Dublin on Tuesday, June 28

–By A Cricket Correspondent