Left-arm seamer Shaheen Afridi claimed four wickets for 22 runs, his career-best T20I performance, as Pakistan beat Bangladesh by five wickets in the ICC Men’s T20 World Cup 2022 Super 12 match on Sunday, November 6 in Adelaide. The win saw them book a place in the semi-final from Group 2 after South Africa were knocked out following their 13-run loss to Netherlands. India also progressed by virtue of the Proteas failing to finish in the top two.

Speaking of the Pakistan vs Bangladesh game, the latter won the toss and opted to bat first. However, they came up with a poor batting effort and only managed 127 for 8 on the board in their 20 overs. Opener Najmul Hossain Shanto top-scored for Bangladesh with 54 off 48. However, the rest failed to deliver.

Afridi dismissed Litton Das for 10 after which leg-spinner Shadab Khan claimed two wickets in one over. Soumya Sarkar (20) perished to the reverse sweep, while captain Shakib Al Hasan was trapped lbw. Shanto batted well to reach his half-century. He hit seven fours before being bowled by Iftikhar Ahmed. 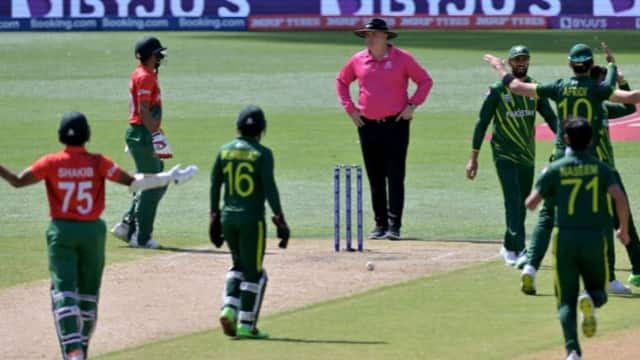 Afridi returned to send back Mosaddek Hossain (5), Nurul Hasan (0) and Taskin Ahmed (1) in his second spell as Bangladesh’s innings completely disintegrated. A cameo from Afif Hossain (24 not out off 20) took the batting side past 125.

Pakistan made a steady start in their chase as the openers added 57. However, both Babar Azam (25 off 33) and Mohammad Rizwan (32 off 32) fell in quick succession. While Babar top-edged Nasum Ahmed to short third man, Rizwan slashed Ebadot Hossain to point.

Mohammad Haris (31 off 18), however, played a fine cameo to lift Pakistan out of mini-trouble. He hit a four and two crucial sixes to ensure the team eased to victory. Mohammad Nawaz (4) and Iftikhar (1) could not contribute for a change, but Shan Masood (24* off 14) was there to see the team home.

Speaking after reaching the semis in unexpected fashion, Pakistan captain Babar said, “Cricket is a funny game. Appreciate all my team the way they played all matches. Pitch wasn't easy to bat on. Little bit two-paced. Me and Rizwan decided to go long, but unfortunately didn't work out. Haris showed aggression, good to see him play. Looking forward to the semifinals - all of us are excited to play.”