The year 2019 was an incredible one for India in many ways. They began the year by registering their maiden Test series win in Australia and went on to remain unbeaten in Tests

The year 2019 was an incredible one for India in many ways. They began the year by registering their maiden Test series win in Australia and went on to remain unbeaten in Tests in the year. India also finished the year as the number one side in the world. Further, they had a successful year in ODIs as well, with the World Cup semi-final loss being the one major disappointment.

Here’s a look at what’s in store for Indian cricket in 2020.

India begins the year with three T20Is against Sri Lanka at home. The first match will be played on January 5 at Guwahati, the second at Indore on January 7, and the third at Pune on January 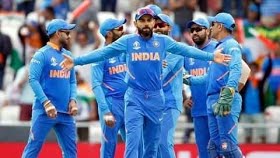 After Sri Lanka, Australia will visit India for a short three-ODI tour. The first match of the series will be held at the Wankhede Stadium in Mumbai on January 14. The second and third games will be played at Rajkot and Bengaluru on January 17 and January 19 respectively.

In one of their biggest challenges, India will play 5 T20Is, 3 ODIs and two Test matches in New Zealand in January-February. The first two T20Is will be played at Eden Park, Auckland. The next three games will be held at Seddon Park in Hamilton, Westpac Stadium in Wellington) and the Bay Oval at Mount Maunganui respectively. The three ODIs will take place at Hamilton, Auckland and Mount Maunganui while the Test matches will be played at Wellington and Christchurch.

After a long tour of New Zealand, India will face South Africa at home in three ODIs in March. The matches will be held at Dharamsala, Lucknow, and Kolkata.

England in India (ODIs and T20Is)

England will visit India for a short series, which will feature three ODIs and three T20Is, in September-October. The series is being seen as a preparation for the ICC World T20 in Australia.

The seventh edition of the World T20 will take place in Australia from October 10 to November 15. India will play South Africa, England, Afghanistan, and two qualifiers. India’s detailed schedule is as below:

India might play a short T20 series ahead of the World T20. They are likely to stay back in Australia following the conclusion of the World T20 to play four Tests and three ODIs. The schedule is yet to be confirmed.