IPL 2020 KKR vs SRH Match 35: Ferguson stars with the ball after super over finish

We witnessed a last over thriller in Abu Dhabi as both the teams were tied at 163 at the end of their 20 overs. Lockie Ferguson, playing his first game of the season, picked up three wickets in the regular innings and two in the super over as KKR somehow managed to get over the line.

Warner won the toss and put the opposition to bat. Shubhman Gill and Rahul Tripathi got them off to a great start as the pair looked solid. After three quiet overs, Tripathi slammed a six and a four off Natarajan and Gill cracked three consecutive fours off Thampi, before Natarajan castled Tripathi with the score at 48-1 at the end of batting powerplay.

Even after the fielding restrictions were lifted, KKR were going at a decent clip. Rashid Khan, who was smashed for two consecutive fours and a six by an aggressive looking Nitish Rana, came back to dismiss Gill for nearly a run a ball 36. Two deliveries later, Shankar got rid of Rana courtesy a fine running catch by Priyam Garg. Morgan and Russell were at the crease then and KKR would have hoped for a real push in the scoring rate. That did not happen as Natarajan continued Russell’s poor IPL by getting his wicket. Former skipper DK combined with current one to get some useful boundaries as 52 runs came in the final four overs, with DK finishing at 29*(14) and Morgan at 34*(23). 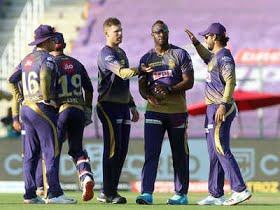 The target set for SRH was 164, and we were in for a surprise as a Warner completely shuffled the batting order. Williamson came to open alongside Bairstow and after a 2 run opening over by Cummins, runs kept on flowing throughout the batting powerplay. KKR bowlers simply weren’t penetrating enough as they allowed SRH to score 57 in the first six overs.

It was Ferguson who came to change the complexion of the game as he picked a wicket each of his three overs. Those were big wickets as he first dismissed the well set Williamson, then went through the defenses of Priyam Garg and Manish Pandey for paltry scores. Varun Chakravarthy continued with his impressive bowling as he got rid of Bairstow.

Reduced to 85-4, SRH were now required to score at the rate of 10 runs per over from thereon. Warner, who was batting at number four, did some rebuilding with Vijay Shankar, still 24 came from the next three overs. Pat Cummins bowled his last in the 16th over and also accounted for the wicket of Shankar. 18 year old Abdul Samad shone with a quickfire cameo of 23(15) and that allowed Warner to bat through. Samad got out on the last ball of the penultimate over via some excellent work at the boundary by Ferguson and Gill. 17 were required from the final over and Warner nearly carried his team over with a hattrick of fours, but fell one run short as we had yet another super over finish on our hands.

Lockie Ferguson made light work of the super over as he castled Warner and Samad inside three deliveries. Samad managed to hit a couple of runs in between as the target for KKR was just three runs.

Rashid came to bowl the super over for SRH but Morgan and DK played risk free cricket to get the required three runs inside four deliveries.